Below are all the WOW Unit Topics and a brief look at the WOW Experiments.  If you would like to see an experiment pdf/doc or an entire unit packet, please visit and fill out the contact us page here.

Are you a Columbus City School teacher or principal interested in having WOW come to your school? If so, please contact us here for more details.

The WOW Programs always start with the Scientific Method Unit because the scientific method is the basis of all science. The information and experiences learned in this unit will help students with future units and experiments.

Only one experiment is selected for this WOW visit as the experiment takes 30 minutes to an hour to complete. Some experiments can be abbreviated to do two during the visit like the Mystery Boxes and Spaghetti-Marshmallow Towers experiments. 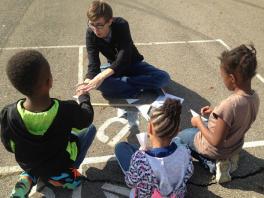 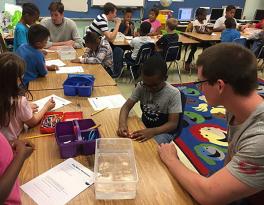 Groups of students will be challenged to make a boat out of clay that holds the most weight. Clay is denser than water, so a randomly-shaped lump of clay will sink. It is up to students to figure out how a boat works, and use their intuitive understanding of surface area and volume to make a boat that can float—and carry a load! 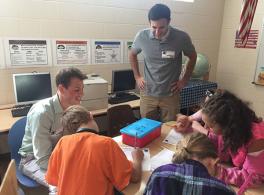 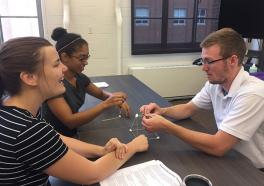 Groups of students will be challenged to make the tallest tower out of raw, uncooked spaghetti and marshmallows. In this activity, students will explore structures and investigate building methods to make not only the tallest structure, but the strongest structure as well. Students will be able to rebuild and alter their designs to improve them while working with a team to create the best design. They will get an insight into the scientific method and real-life process of designing, testing, and redesigning their product just like architects and engineers.

For the second or third year a school is in WOW, the WOW Programs will actual begin with the Measurement Unit instead of the Scientific Method Unit. This unit is more math focused, but the tools learned here are helpful in data collection and analysis for science experiments. 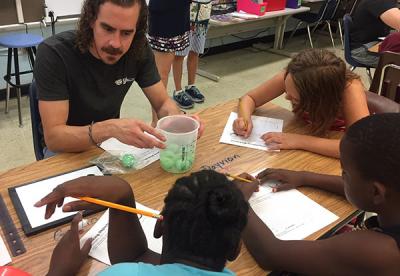 Measurement began in ancient times when people needed a way to keep the trading of goods fair.  Early measurement was definitely an improvement from no measurement, but it still had some problems.  Often, body parts such as feet were used to make measurements.  Not all feet are the same size, so measurements made with peoples’ feet were not consistent.  Eventually a system of standard measurement developed, using constant values.  This activity helps students understand why standard units of measurement are needed.

Sizing Things Up (K-2 grades: 4 stations - 30-45 minutes -- for larger classes, measuring with rulers can be the 5th station)

Measurement is an important part of life at all ages and provides necessary information for the other stages of scientific investigation. This exercise promotes basic measuring skills with simple ordering and categorization activities.

Measuring the length of a straight line is easy; the only equipment necessary is a ruler. Determining the length of curvy lines seems more difficult but can be just as simple with the proper tools. A measuring wheel can trace winding paths to measure their lengths. Construction and use of measuring wheels will be described in this activity.

This experiment illustrates making measurements and seeking patterns.  Students will collect data, prepare a graph, and interpret the data and graph in order to determine a relationship between water level and number of sunken objects.

The Chemistry Unit will be implemented into the WOW Program visits once throughout the school's three year duration with the program. Teachers will pick at least 4-5 experiments from the experiment options below. All experiments are 5-10 minutes in length and for grades K-5. 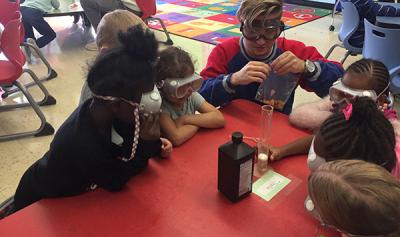 Chemical compounds are grouped together based on similar properties. Acids are chemical compounds that are sour or bitter. Bases are a group of compounds that have opposite properties to acids. Bases are characteristically slippery. A number scale called a pH scale, which spans from 0 to 14, is used to provide information on how strong an acid or base is. Values on the pH scale between 0 and 7 are acidic; values above 7 are basic. A pH value of 7 corresponds to the neutral condition, neither acidic nor basic.

This experiment is designed to show students the concepts of polarity, miscibility, and immiscibility. Chemical polarity describes how equally bonding of electrons are shared between atoms.

Physical Change: Is it a Solid or Liquid - Cornstarch/Water

The Electricity Unit will be implemented into the WOW Program visits once throughout the school's three year duration with the program. All experiments below are 5-10 minutes in length and for grades K-5. 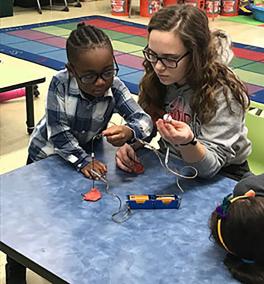 Electricity can flow though a complete, closed circuit, but cannot flow though an open circuit. This concept is reinforced with a fun game that tests the steadiness and patience of the players while illustrating this basic fact.

Circuits are everywhere! They are responsible for the lights over our heads, how our cell phones work, and how we watch TV. These devices only work, however, when those circuits are closed. This activity allows students to witness what it means when a circuit is closed, and to test what materials (including themselves) electricity can flow through.

Batteries use chemical reactions to create an electric current. In 1800, Alessandro Volta made the first battery by layering copper and zinc in a jar of salt water. The chemical reaction created the first steady supply of electricity. The steady supply of electricity from batteries is used to power all sorts of electrical devices such as toys, light bulbs, radios, calculators and cars. Following Volta’s example, we can make batteries, too.

There are different ways to make an electric circuit.  In a series circuit, the amount of current through any part of the circuit is the same, while a parallel circuit divides the electric current into two or more “parallel” paths. By comparing the brightness of light bulbs, we can trace the current and voltage in a parallel and series circuit, to see how they differ.

The Geology Unit will be implemented into the WOW Program visits once throughout the school's three year duration with the program. Teachers will select experiments that total a 45 minute to 1 hour class visit. For this unit, we work in collaboration with The Ohio State University's Byrd Polar and Climate Research Center and the Polar Rock Repository. They have rock boxes that can be loaned out to schools. Details to request a rock box can be found here at http://research.bpcrc.osu.edu/rr/rock_box/. 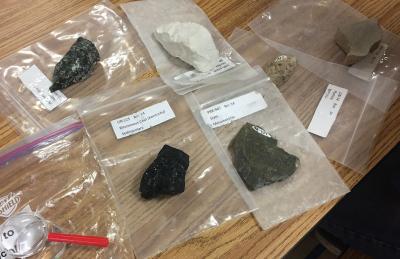 In this activity, students will explore what is in the soil beneath their feet. Once the activity concludes, students will be able to draw and describe what they might find in soil. Soil is the loose surface layer of the Earth where plants grow. It consists of organic material (plants, animals), rocks, and minerals. Soil is formed over a long period and can take up to 1000 years for just an inch of soil to form.

The Earth’s solid crust is broken up into numerous tectonic plates, which slowly move, carried by the motions of the slowly-convecting semi-liquid mantle. These tectonic plates collide or separate, forming mountain ranges, ocean trenches, mid-ocean ridges, and regions of volcanic activity. (The “Making Mountains” activity illustrates the collision of an ocean plate and a continental plate.) The long-term result of this is that the locations of the continents have changed over time.

This activity models the Earth's interior using different kinds of fruit.  Students will learn about the Earth’s crust, mantle and core.

Erosion is a geologic process that shapes the entire surface of the Earth. Water has, over millions of years, carved deep canyons, such as the Grand Canyon of the Colorado River; likewise, glaciers scoured out the basins that filled to become the Great Lakes. All the rock eroded away by rivers and glaciers does not disappear; it ends up as sand on beaches, silt in river deltas, glacial moraines, and ultimately, returns to rock as sandstone, shale, or conglomerate. This experiment explores how river erosion takes place. By varying the angle of the cookie sheet, different river gradients can be simulated, and the conditions that allow a river to meander can be explored. 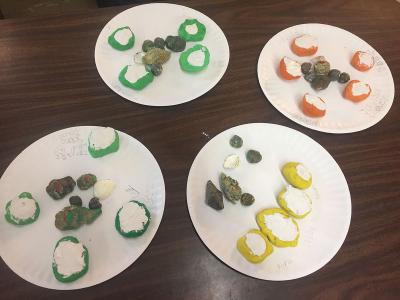 Fossils are something every student has heard about or seen, but few have actually touched or examined them.  In this experiment, students will do just that!  In addition, students will make their own fossils, and learn about where and when certain fossilized animals lived in the past.

The Insect Unit will be implemented into the WOW Program visits once throughout the school's three year duration with the program. Teachers will select whole categories or pick and choose from each category to total 45 minutes to an hour. For this unit, we work in collaboration with Center of Life Science Education and the Insectary for the live insects. We also purchase Painted Lady larvae from Carolina Biological. 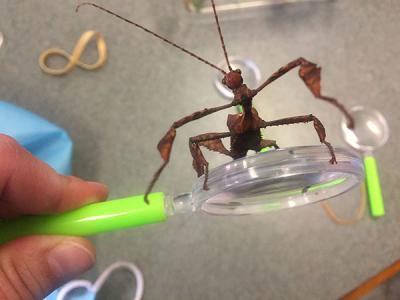 All about Insects Category (Total for grades K-2: 40-45 minutes)

A * (star) indicates that live insects are involved.